This is a mere snapshot of J A Baker’s life. Much more information is in the latest Collins’ Collected Editions of his work, BUT the essential work, if you want to learn more about him, is My House of Sky by Hetty Saunders, published in October 2017 by Little Toller Books (see their website at Little Toller Books website. ) ISBN 978-1-908213-49-5. This book is a must for anyone with an interest in J A Baker 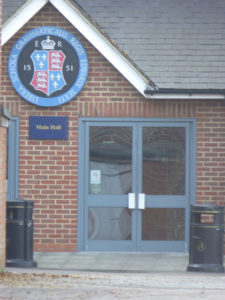 John Alec Baker was born on August 6th 1926 and lived with his parents in Finchley Avenue, Chelmsford. He was their only son and was educated, first at a nearby primary school1 and then at King Edward VI Grammar School (generally known as KEGS) where his nickname, based on his surname, was Doughy! His father, Wilfred, worked as a draughtsman for the local electrical engineering company, Crompton Parkinson.2

Baker had a variety of jobs and although he worked for the Automobile Association in Moulsham Street, Chelmsford4, he never learned to drive! This may have been due to his poor eyesight.

Another Chelmsford site associated with J A Baker is Foreman’s in Roxwell Road. This was a well-established Chelmsford packaging company, specialising in wooden boxes and crates, with an extensive wood yard running down to the Rivers Wid and Can. Baker started work here in 1944, aged 18, and it is thought that he followed his father’s career and trained as a draughtsman. He especially enjoyed going down to the rivers where, no doubt, he appreciated the various plants and birds of the water meadows. The original Foreman offices, where he worked, can be seen from the road, but they and the rest of the site are now a mix of flats, apartments and houses. L P Foreman & Sons has relocated within Chelmsford and a fascinating history of the company is on their company website at L P Foreman website. )

After the publication of The Peregrine, he gave up paid work altogether and lived on National Assistance and money from awards. Such awards included a prestigious Duff Cooper Memorial Prize of £1,200 in 1967 and a grant from the Arts Council. His excursions into the countryside were therefore made either by foot or on his bicycle; although Doreen could drive and they sometimes went out together by car.

Sadly he suffered from rheumatoid arthritis and was severely incapacitated from around 1970 onwards. (Notice, as pointed out by Robert Macfarlane in Landmarks page 143, how his knuckles of his first and second finger appear to be fused together, and the back of his hand has swollen and stiffened into a pale spatulate shape… ) He was prescribed drugs but these caused a cancer which led to his untimely death on December 26th 1987 when he was just 61 years old. 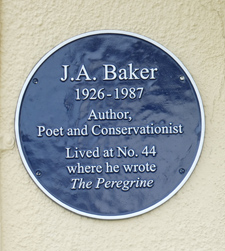 An official honour came from Chelmsford City Council in February 2020 with the placing of a Blue Plaque outside 44 Stansted Close where Baker lived while writing The Peregrine. He is described as being an Author, Poet and Conservationist. The Council’s biography and full citation is at Chelmsford City Council website. This address appears (at the bottom right) on a draft of The Peregrine that he sent to his publisher Collins. It is interesting to see that Baker like many other authors (eg J R R Tolkien and today’s J K Rowley) wanted to be known by his initials rather than full name. 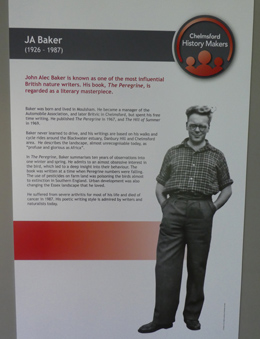 A further recognition by the Council is evident at the Chelmsford City Museum in Oaklands House, where there is a panel about J A Baker in a series highlighting Chelmsford History Makers. As a child he lived with his parents in Finchley Road and their back garden extended down to Oaklands Park. In his Diary, he noted seeing Siskin and Lesser Redpoll there on 21 March 1955.

Much more information about Baker is provided by Mark Cocker and John Fanshawe in the 2010 Collins edition of his work. This information also appears in the later Collins’ editions of 2015 and 2017.

Our understanding of J A Baker has been greatly increased by the publishing in October 2017 of My House of Sky by Hetty Saunders. As well as a very well researched biography, the book includes a selection of his poetry, an introduction by John Fanshawe to, and photographs of, items in the J A Baker Archive at the University of Essex and photographs of locations in Baker Country by Christopher Matthews. My House of Sky is published by Little Toller Books and is a must for anyone with an interest in J A Baker – ISBN 978-1-908213-49-5. 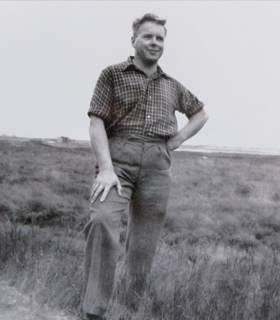