The quality of The Peregrine was immediately recognised on its publication in 1967.

It is interesting to read when awarding a Duff Cooper Memorial Prize of £1,200 in 1967 to J. A. Baker, the judges (who were not birdwatchers) were all overwhelmed by Mr Baker’s sensitivity and the poetry of his style.

A glowing review came from Kenneth Allsop, one of the leading broadcasters and naturalists of the time. In The Evening News, dated March 23 1967, he writes It is a masterpiece. It instantly takes its place among the great triumphal affirmations of man’s search for his lost place in the universe, his inner need for oneness with Nature.

Below are some relatively recent comments on J. A. Baker’s writing. They show the high regard in which he is held today.

In their encyclopaedic work Birds Britannica 2005, Mark Cocker and Richard Mabey argue that in Britain an expression of the heightened sensitivity to this bird icon (The Peregrine) was J. A. Baker’s The Peregrine (1967), one of the most outstanding books on nature in the twentieth century. .…Baker’s book is a mixture of detailed observation and his idiosyncratic prose-poetry. There is an occasional metaphysical density to the language, but more often he described the falcon’s actions in passages of radiant lyricism that both express his own burning obsession and restate all the qualities that make the bird such a totem species. 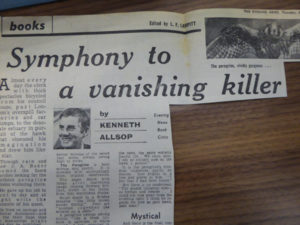 Tim Dee in his book The Running Sky (2009) says of The Peregrine …..For me this was the greatest and most needed bird book of my youth. For years I ate it up again and again, returning to loved and memorised passages, and breathing its poisoned skies with a shared horror at the coming vacuum, the air without the birds that gave it shape. Dee, however, shares the scepticism of many birdwatchers and suggests that Though steeped in what seems to be real observation, there are times when you feel you might be reading fiction.

Perhaps the most ardent admirer of The Peregrine is Robert Macfarlane, who looks at Baker’s writings as Director of Studies in English at Emmanuel College, Cambridge, rather than as a naturalist. Robert has written extensively about Baker in The Wild Places (2007) and Landmarks (2015). In Landmarks, he notes that with his poor eyesight Baker made an unlikely birdwatcher. But this myopic man would write one of the greatest bird books ever, the fierce stylistic clarity of which must be understood in part as a compensation for the curtailed optics of its author’s eyes…. A new edition of The Peregrine was issued by Collins in 2017 to mark the fiftieth anniversary of its first publication. It has an Afterword by Robert Macfarlane. An article by Robert in The Guardian newspaper on 15 April 2017 entitled Violent spring: The nature book that predicted the future is an excellent read. It can be found at article.

Conor Jameson is another person who has a high regard for J A Baker’s works. Some of his thoughts on The Peregrine can be found at Conor’s blog. His research into the debate as to whether or not Baker was actually seeing so many Peregrines was first published around 2010 in Birdwatching magazine and then reprinted in Conor’s book Silent Spring Revisited (2012) as the prologue. This book looks at the huge influence of Rachel Carson’s book Silent Spring which had been published 50 years earlier and drew early attention to the effects that pesticides were having on the natural world. It was very good to meet Conor at the September 2018 meeting of the Chelmsford RSPB Group when he spoke about the ornithologist, William H Hudson, who did so much for the RSPB in its early days. 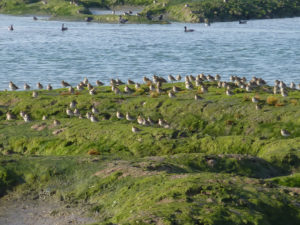 Another reference from Mark Cocker comes in Claxton (2014), his study of nature in the local area around the village in Norfolk, where he lives with his family. He tells how in recent times he has twice been asked to nominate what he considered to be the best books on nature and birds and both times he had to pass. He goes on But if I were forced to make a selection at gunpoint then I would have no hesitation in naming the works of J. A. Baker (1926 – 1987). Later in the book he notes that All the writers captivated by The Peregrine – who culminate in the figure of J. A. Baker, the author of The Peregrine surely one of the finest works on nature in the English language – seem to be compelled to ever-higher superlatives in honouring this species.

Another admirer is Kathleen Jamie. In her 2005 book Findings she notes how she sent for a secondhand copy of The Peregrine. At that time it was out of print and the copy she obtained had formerly been owned by the appropriately named John Hunter. (This may be the John Hunter who worked for Essex County Council and was an expert on the historic landscape of Essex.) Jamie expresses her surprise at Baker’s observations of The Peregrine and how little was known about him. Thankfully the latter has changed with the publication of the Collected edition, but the doubts about some of his ‘facts’ remain.

There is perhaps one slightly dissenting voice. This comes from Helen Macdonald in her book H is for Hawk (2014), in which she describes how she raises and cares for a goshawk. In doing this she is heavily influenced by T. H. White and his book The Goshawk. She becomes a falconer with direct experience of her bird Mabel, rather than an observer through binoculars. She writes Baker’s hawks were made of death. Troubled, I hoped my hawk was life. I hoped it very much. I’d never believed in Baker’s falcons, because I’d met real ones before I’d ever read his book: cheerful, friendly falconer’s birds that preened on suburban lawns. However, Macdonald seems to share Baker’s obsession with a hawk. In a BBC Television Countryfile interview she says I saw the world through her eyes (her hawk) and all the things I wanted to be, she was. “

A very recent discussion of The Peregrine is by the German screenwriter, film director and writer, Werner Herzog who called it the one book I would ask you to read if you want to make films, (on You Tube) and said elsewhere … it has prose of the calibre that we have not seen since Joseph Conrad (see Werner Herzog Required Reading ). Herzog’s remarks came in a fascinating discussion with Professor Robert Harrison, a Stanford Professor of Italian Literature, at Stanford University, California, in February 2016. The full discussion is available on You Tube.

A discussion between Professor Harrison and Andrea Nightingale, Professor of Classics at Stanford about the book is well worth listening to with its fresh insights into Baker’s great book. It can be found at Entitled Opinions website. and was broadcast on 13 April 2016. An audio only version of the interview with Werner Herzog was broadcast on 23 March 2016.

One of the latest papers about J A Baker is by Professor Sean Nixon, of the Department of Sociology at the University of Essex. His paper entitled Vanishing Peregrines: J. A. Baker, Environmental Crisis and Bird-Centred Cultures of Nature, 1954–73 can be found here.