The Peregrine (Latin Falco peregrinus) is one of the world’s great birds, if not the greatest, in terms of its range and abilities. This accolade recognises the peregrine’s remarkable speed and hunting ability. In level flight, a speed of 60 miles per hour is thought likely, but in a stoop, when the bird drops out of the sky on to a victim, speeds of over 120 miles per hour are estimated. (Some, however, believe that the speed can be well over 200 miles per hour!) Peregrines can be found throughout the world, with the exception of the highest latitudes north of Spitzbergen.

In the mid-1960s when Baker was writing, the peregrine was under threat as a species. A build-up of the DDT pesticide in the food chain, of which the peregrine is at the top, led to weakening of their eggshells. Brooding of eggs was unsuccessful as the weight of the parents was too great for the shells. It was the possibility that this great bird might become extinct that influenced Baker to write his book.

Once the damage caused by DDT was understood, the product was banned and the population of peregrines has since recovered, from an estimated low in Britain of 350 pairs in 1962 to over 1,500. Indeed some have moved from their traditional nesting areas of sea cliffs and northern uplands to urban locations. They can now be found on many high buildings, such as the chimneys of Tate Modern, and locally in Essex on Bradwell Nuclear Power Station. At some urban nests, telescopes have been set up to enable passers-by to see the birds close-up. Another site is on the tower of Derby Cathedral. More information and webcam can be found at Derby Cathedral peregrine webcam. 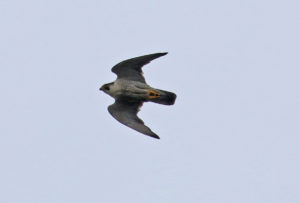 In Britain, peregrines generally breed in the uplands of Scotland, North England and Wales, but are increasingly taking advantage of tall buildings elsewhere. They are resident all year round, with some winter visitors and passage migrants in Essex. In the 1960s, however, most peregrines in Essex were from Europe and these are the birds that Baker writes about. Unfortunately, peregrines are still under threat from gamekeepers who believe that they are killing grouse and other game birds. This is despite peregrines having the maximum degree of protection under UK law. One final anecdote is that the number of peregrines fell in the Second World War when they were culled to prevent them killing carrier pigeons. To find out much, much more about the peregrine go to the RSPB website – peregrine.

The Peregrine Network is an initiative conceived and organised by the Hawk and Owl Trust bringing together Peregrine researchers and enthusiasts and creating a central digital platform which helps share experiences, identify issues and, in turn, increases our collective understanding, awareness and knowledge that will help to educate and enthuse future generations. Information about the Project is at Peregrine Network website.

Victims Of The Peregrine

As has been noted elsewhere on this site, there is a dilemma between J. A. Baker as a writer of uplifting English and his observations as a birder, which sometimes appear to be more poetic than accurate. The taking of other birds is the most famous and notable feature of the peregrine. Indeed Jules Pretty describes The Peregrine as ‘J. A. Baker’s book of the dead’. 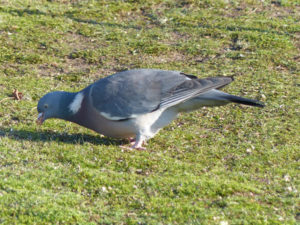 In the first, introductory section of The Peregrine, J. A. Baker lists the 619 kills that he had found over ten winters. His table shows that the woodpigeon is easily the bird most favoured by peregrines and makes up almost 40% of kills. This is in line with figures from elsewhere which indicate that 50-80% of peregrine victims are pigeons. Baker was, of course, writing of a period before the arrival of the collared dove. It is hard to believe that in 1955 there were just four individual collared doves, before the population exploded to its current total of almost 300,000. This arrival from Europe is likely to be a victim of the peregrine’s stoop. Another bird that fails to get a mention is the avocet. Like the collared dove it has greatly increased in numbers since the mid-1950s.

Baker suggests that peregrines are particularly attracted to birds with white as the predominant colour. On December 1st he notes that woodpigeon were never still, and their white wing-bars flashed in sunlight, a temptation and challenge to the watching peregrine. He did not, however, record an attack by the peregrine on that day.

The book makes it clear that a wide range of birds were victims of the peregrine. Taking two consecutive dates as an example; on November 29th, Baker notes the remains of a great crested grebe. He reckons that it weighed two and a half pounds when alive, but that it had been killed by a stoop from a considerable height. The peregrine had carefully butchered the bird and it now weighed less than a pound.

On the following day, Baker finds the remains of a snipe and kingfisher, as well as a woodpigeon. He goes on to describe how I found myself crouching over the kill, like a mantling hawk. My eyes turned quickly about, alert for the walking heads of men. Unconsciously I was imitating the movements of a hawk, as in some primitive ritual; the hunter becoming the thing he hunts.

In addition to taking birds, Baker observes the killing of mammals such as hares, rabbits and mice as well as the eating of earthworms, which appear to be a particular favourite! 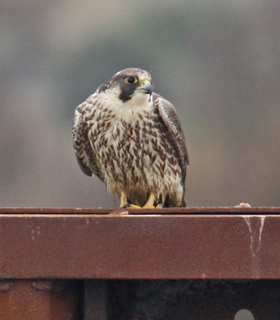 The full table drawn up by Baker shows that over the ten years he observed the peregrine kills, individual species were represented as follows: